Many of us wish we were having more sex. But how much sex is considered ‘normal’ or ‘healthy’, really? The thing is, there’s no right or wrong answer to that million-dollar question.

After all, there are a number of factors that can affect how often you’re jumping in the sack. But if you’re concerned if you’re getting enough, you’re in the right place.

We take a look…

What are the benefits of sex?

There are a bunch of benefits that come with regular sex. But as well as building a strong bond between you and your partner, sex also offers a variety of other health benefits, including:

While these benefits are certainly great, it doesn’t necessarily mean that more sex will improve your health. Nor, does it mean that less or no sex at all will make you less healthy.

After all, sex is only one of many factors that can influence your health. However, studies do show that regular sex can be good for both the mind and body. That being said, there is no “right” amount of sex, as this can vary greatly, for a number of reasons from one individual to a couple.

Typically, those that are single tend to have more sex than those in a relationship (married or not). Studies have revealed that couples have sex once weekly on average.

In terms of where our sex lives decline, the greatest decline is typically seen in people in their 50s. Alongside this, a variety of factors contribute towards an up-down sex life, including:

Rest assured, it doesn’t necessarily mean that getting older automatically means less sex, or no sex at all. Just as much as it doesn’t mean that young people will have shed loads of sexual encounters.

In fact, studies have shown that those born around the 1940s and 50s were having more sex in their 20s and 30s than millennials are today.

Whether you’re at it several nights of the week, or you’re more a two-weekly individual or couple, having less sex doesn’t mean your relationship is no good. However, sex has been shown to play an important role in a relationship, for a number of reasons.

Research by Harvard University reports that 90% of men and women felt that a “good relationship is important to the quality of life”. From this, half said that although sex was pleasurable, it is not a necessary part of a good relationship. Interesting, huh?

Also Read: What women think when you get ED

While on the other hand, the majority of dissatisfied men said they didn’t get enough sex, with these negative feelings drifting into how they felt about their relationship. When it came to female participants, however, only two-thirds of dissatisfied women felt the same.

It’s easy for us to get caught up with the stress of work, family life and everything in between, which can have an impact on our sex drive, therefore sexual activity.

Mental health problems, such as anxiety and depression can quickly get in the way of us relaxing and having a positive body impact. Feeling positive about ourselves can contribute towards a healthy sex life, and relationship.

A healthy diet and regular exercise play a key role in a healthy libido and sexual function. This is due to the way they affect heart health and blood circulation.

There are a number of factors that can affect sex drive. During surveys, these were the results:

Has Covid impacted our sex lives?

With the impact of lockdowns and rules/restrictions, research has shown 32% of men were having less sex, while 25% of women were getting hot and heavy less often.

A huge 59% of both men and women reported no impact on their sex lives. However, it’s clear to see that the majority of impact was no doubt on couples living apart or single people. 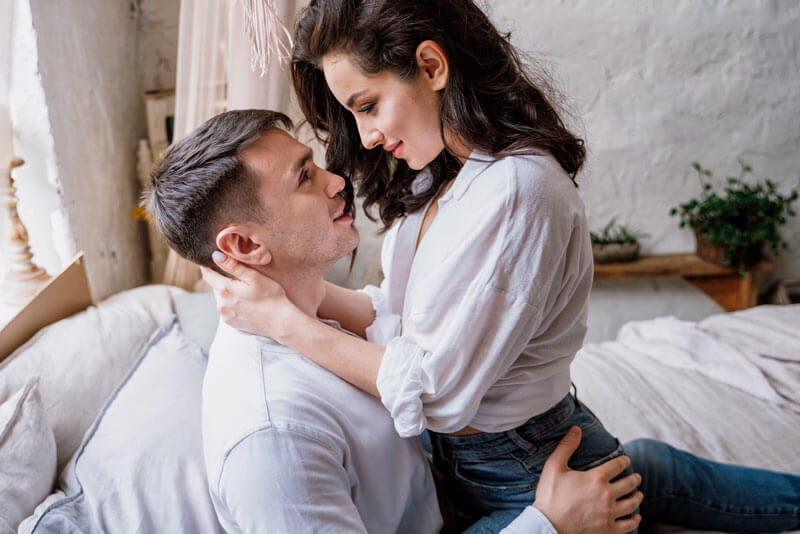 We all have different experiences when it comes to sex, including our attitudes towards the subject itself. During research, it was obvious that men tend to feel greater distress if they are not totally satisfied with the amount (or quality) of sex.

Also Read: We heard you want to boost your sex drive…

One study showed that sexual satisfaction was more important to women than quantity, while men are more likely to link their sexual frustration to their relationship.

In addition, research showed that women tend to connect sexual satisfaction with intimacy and the length of their relationship, while men associated it with sexual performance and their ability to satisfy their partner with an orgasm.

On average, couples in the US have sex once a week. The frequency of sex sessions is higher in younger couples, and tends to decline pretty sharply after we hit 50.

Those that are single or without children, tend to have more sex than those with a partner or with children.

But that doesn’t necessarily reflect the true happiness of a relationship, however. What can affect, though, is sexual dissatisfaction. Being dissatisfied about your sex life, as a man, is often linked to both quantity and quality of sex. Women, on the other hand, frequently build an association between sexual satisfaction and intimacy and the duration of a relationship.

So, how can you overcome sexual dissatisfaction? It’s all about communication.

The trouble is with sexual satisfaction is that frequency and satisfaction are closely linked. This means that if both partners are unable to satisfy one another, the frequency can decrease, no matter how old you are.

Struggling to perform in bed?

So, it would seem that both men and women look at a “healthy” sex life differently. The key to having a happy, healthy sex life sits with your communication.

Being open with your partner can help to overcome any problems and improve your satisfaction in the sack.

But if you’re looking for a little help in the bedroom, there’s always Male Extra. Our 100% natural formula gives you bigger and harder erections, for your best performance yet! Get ready for better orgasms and more stamina than ever before.